WHEN WAS THE FIRST TOOTHPASTE INTRODUCED? 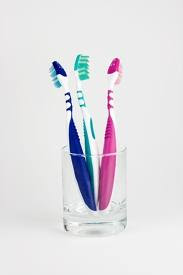 People have been brushing their teeth for thousands of years! In fact, the first “toothbrush” was created around 3000BC! Ancient civilizations used a thin twig with a frayed edge to rub against their teeth for cleaning.

The first toothbrush with bristles – similar to today’s toothbrushes – was invented in 1498 in China. Brushes were made out of bone or bamboo with bristles made from the hairs on the back of a hog’s neck.

It wasn’t until 1938 that the first nylon bristle toothbrush was introduced and people quickly became aware of practicing good oral hygiene.

Here are some other interesting facts about your toothbrush (and toothpaste):

• Most people are said to use blue toothbrushes over any other color
• The first toothpaste was used in 500 BC in China and India
• On average, children smile about 400 times per day
• Your toothbrush should be replaced every two months
• The first known toothpaste was used in 1780, Crest was introduced in the US in 1955 and Colgate in 1873
Posted by Dr. george bardawil at 6:22 AM